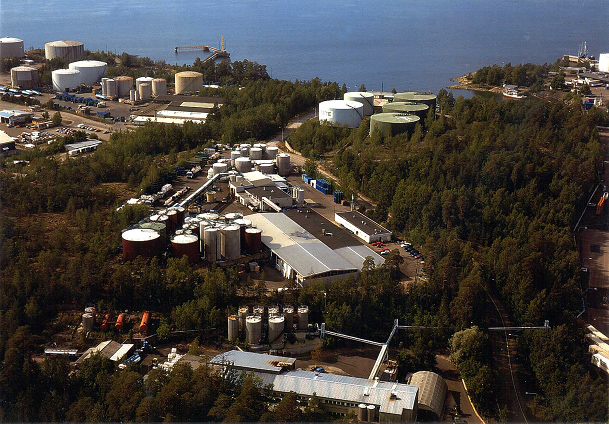 The world of lubricating oils has experienced a huge change in the past thirty years since Neste Oil started manufacturing lubricating oils in 1984. The technology has taken huge leaps forwards since then, and society has also changed.

Neste Oil has over the years become a large regional player in lubricants and one of the largest global Group III base oil manufacturers. Neste Oil provides full portfolio of lubricants and other products to its customers internationally.

Neste Oil started manufacturing its own lubricating oils thirty years ago when it purchased a lubricant factory in the Laajasalo oil port area of Helsinki from Algol in 1984. Expansion of the business started right away: the factory capacity was tripled. At the time, the lubricating oil market was nothing like today. Since those days the total markets have fallen by tens of percentages. Neste-brand was introduced to lubricants already in 1983.

"Up to the 1990s Farm Universal, an agricultural oil, was one of our most popular products," says Purchase Manager Pekka Nykänen. "Every Finnish tractor owner had a barrel of general purpose oil in their yard. They used the same oil for the lubrication and hydraulics of their farm machines."

The products were often distributed by active service stations or village stores. The lubricating oils were delivered to the yard of a service station and the customers came with their own barrels or jerry cans to get their oil – or the entrepreneur took the oil to them with his pickup truck.

Much more lubricants than now were used in Finland thirty years ago, partly because of two-stroke engines that use a mixture of oil and gasoline.

"There were around a million mopeds with two-stroke engines in Finland. Their combined oil consumption was very high," Regional Manager Kai Strang recalls.

The change has been inevitable. "Engines improved so much that lubricating oils had to be improved as well. The modern engines would probably even not run properly with the old oils," Strang believes.

The change is also evident in the broader lubricant product range. Strang says that different car makes used to use the same oils, but now car manufacturers only use specifically developed oils and the oil used by each manufacturer is slightly different.

"Quality is important because the oil is replaced so infrequently. The oil must retain its quality for a long time and continue keeping the engine clean," Nykänen explains.

The demands of other technical products have also increased. "If you were to use the hydraulic oil that was used a couple of decades ago in the tailgate hoist of your modern truck, you would probably not be able to get the tailgate up when the temperature is below freezing. The hydraulic channels are much smaller than before," Nykänen says.

"The quality of lubricants continuously improves. All of the current lubricants are vastly different from those sold thirty years ago, also in industrial side."

Technology has also influenced our way of doing business. Most lubricating oils are currently sold directly to customers to customers online. Furthermore, Neste Oil's lubricating oil sales activities have become more international over the years: oils are currently sold in Scandinavia, Russia, the Baltic states and many other Eastern Europe countries.

Neste Oil gave up its Laajasalo facility in 2009 when the city of Helsinki decided to vacate the area. The toll blending and packaging of lubricants was outsourced to Neste Oil partners. R&D activities still continue as before, however, and new lubricants meeting the ever stricter demands are launched all the time.

A good example of the modern products developed in Finland is Neste Turbo NEX heavy-duty engine oil. It is designed for modern diesel engines that require high quality oils and have long drain intervals.

Turbo NEX is fully synthetic and does not contain any mineral oil. It is manufactured from Neste Oil's own NEXBASE base oil. It meets the strictest diesel engine oil specifications (API CJ-4 and ACEA E9), and it can be used in heavy-duty vehicles.

The high quality offers many benefits. Turbo NEX has an extensive viscosity range, which means that it can be used all year round even in the north. This also means that switching between summer and winter grades is no longer necessary.

Furthermore, Turbo NEX extends the service life of exhaust gas post treatment systems by, for instance, preventing the blocking of diesel particle filters. It is a diesel engine oil designed to reduce the wear of engines and the thickening of oil caused by oxidation. Turbo NEX also keeps pistons cleaner, has good soot binding and anti-foaming capability, and reduces the shear of engine oil during operation.

"A Finnair copilot issued an alarm"

The thirty-year history of Neste Oil lubricating oils has had its share of dramatic moments, too. Nykänen especially remembers a fire at the packaging plant of the Laajasalo facility in the late 1990s.

"It was almost a huge disaster," Nykänen says. "We were informed of the fire from an unusual source, the copilot of an airplane. A Finnair plane was flying over the facility and the copilot noticed smoke coming from a vent of the building. He notified the air traffic control and they alerted the fire department."

"It was a really good thing that the alarm came so early. If the fire had had more time to spread, it could have ignited the other plants in the area, too."

Fortunately, the incident had a happy ending. Kai Strang says that a decision to build a new packaging plant was made. The equipment in the new plant was more powerful than in the old one, which allowed an increase in production volume and the entry of new products into the market.