Neste Oil Corporation's Annual General Meeting (AGM) was held today at the Helsinki Fair Centre and adopted the company's Financial Statements and Consolidated Financial Statements for 2014 and discharged the Board of Directors and the President & CEO from liability for 2014.

The AGM also approved the Board of Directors' proposal regarding the distribution of the company's profit for 2014, authorizing payment of a dividend of EUR 0.65 per share. This will be paid to all shareholders included in the register of shareholders maintained by the Euroclear Finland on the record date set for payment of the dividend, which shall be 7 April 2015. Payment will be made on 14 April 2015.

Composition of the Board of Directors

In accordance with the proposal made by the Shareholders' Nomination Board, the AGM confirmed the membership of the Board of Directors at seven members, and the following were re-elected to serve until the end of the next AGM: Mr Jorma Eloranta, Ms Maija-Liisa Friman,  Ms Laura Raitio, Mr Jean-Baptiste Renard, Mr Willem Schoeber, and Ms Kirsi Sormunen. Mr Marco Wirén was elected as a new Board member. Mr Eloranta was re-elected as Chair and Ms Friman as Vice Chair. Board member introductions can be found at company's web site.

The AGM decided to keep the remuneration to the Board unchanged as follows:

In accordance with a proposal by the Board of Directors, PricewaterhouseCoopers Oy, were appointed as the company's Auditor, with Authorized Public Accountant Mr Markku Katajisto as the principally responsible auditor for Neste Oil Corporation, until the end of the next AGM. Payment for their services shall be made in accordance with their invoice approved by the Company.

Amending the Company's Articles of Association

In accordance with a proposal by the Board of Directors, the AGM amended the Company's Articles of Association 1 § as follows:

The company name of the Company is Neste Oyj, Neste Abp in Swedish, and Neste Corporation in English. The Company is domiciled in Espoo. "

In accordance with a proposal by the Board of Directors, the AGM authorized the Board to decide the purchase of the Company's own shares ('Buyback authorization') under the following terms:

Under this Buyback authorization, the Board shall be authorized to decide the purchase of and/or take as security a maximum of 1,000,000 Company shares using the Company's unrestricted equity. The number of shares shall be equivalent to approximately 0.39% of the Company's total shares.

The Board of Directors shall decide the other terms related to the buyback of Company shares. The Buyback authorization shall remain in force for eighteen (18) months from the decision taken by the AGM.

In accordance with a proposal by the Board of Directors, the AGM authorized the Board to decide the conveyance of the treasury shares held by the Company under the following terms:

Under this authorization, the Board shall be authorized to take one or more decisions concerning the distribution of the treasury shares held by the Company, with the proviso that the number of shares thereby conveyed totals a maximum of 2,000,000 shares, equivalent to approximately 0.78% of all the Company's shares.

The treasury shares held by the Company can be conveyed against payment or distributed free of charge. A directed share issue can only be made free of charge if there is a particularly weighty financial reason, in respect of the Company's interests and those of all its shareholders, for doing so.

The Board will also be responsible for the other terms and conditions of a share issue. The authorization shall remain in force until 30 June 2018.

Availability of the minutes for review

Neste Oil Corporation is a refining and marketing company specializing in high-quality fuels for cleaner traffic. The company produces all of the most important oil products and is the world's leading supplier of diesels made of renewable raw materials. In 2014, the company's net sales stood at EUR 15 billion, and it employs some 5,000 people. Neste Oil shares are listed on the NASDAQ Helsinki.

Neste Oil has been accepted into the Dow Jones Sustainability World Index. The company has also been on the Global 100 list of sustainable companies for several years in succession. CDP Forest has selected Neste Oil as one of the best companies taking care of their forest footprint in the oil and gas industry.www.nesteoil.com 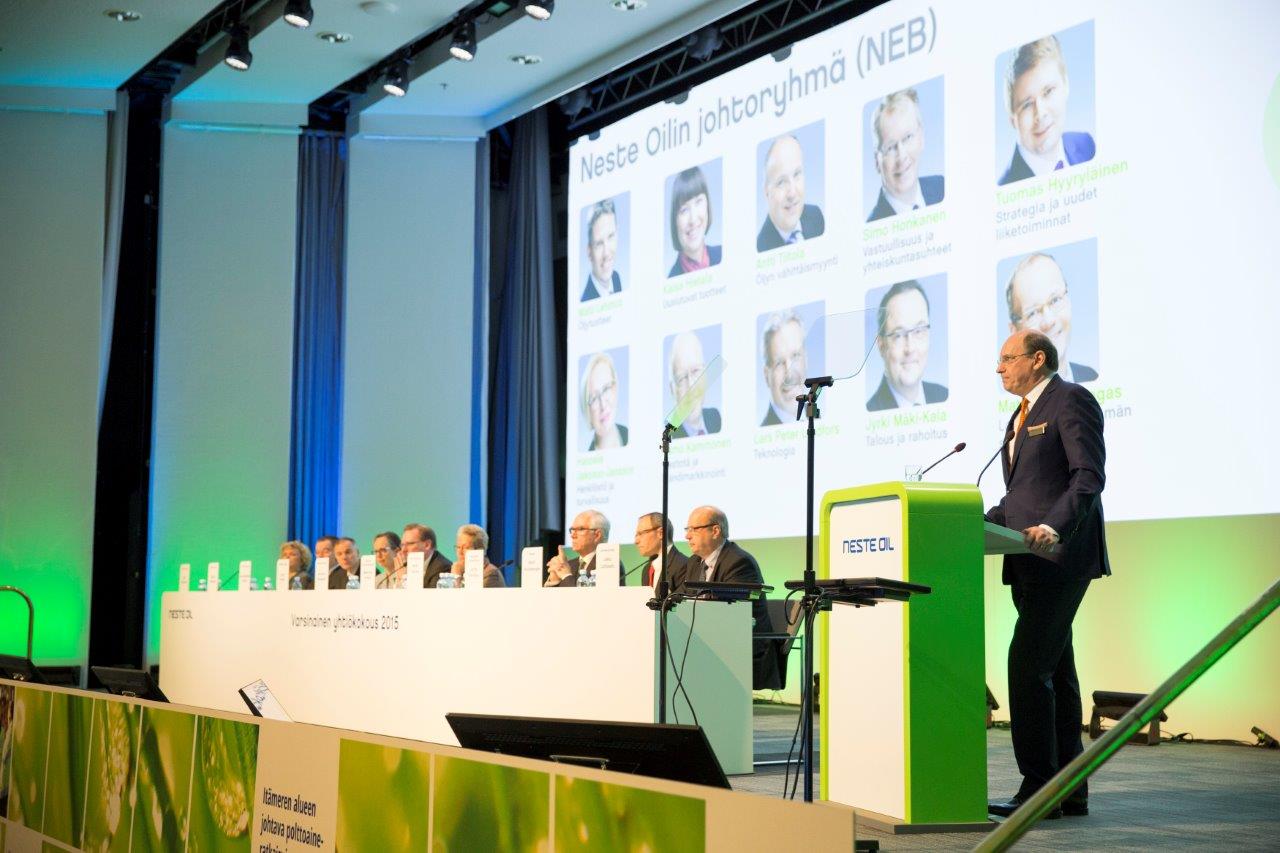