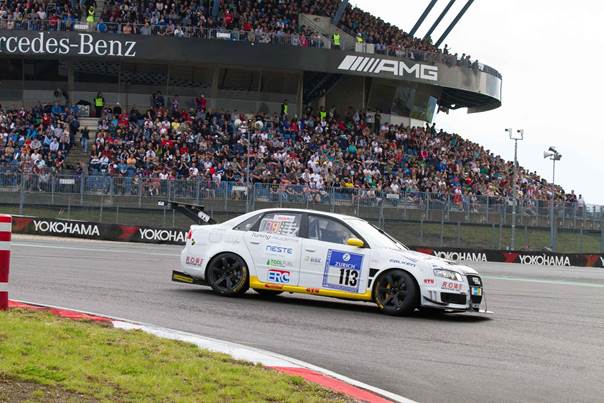 Excellent performance thanks to Neste Renewable Diesel: The Audi A4 in front of the  Mercedes terrace located in the Yokohama-S bend during the Nürburgring 24 h-hour race.

The Nürburgring 24-hour race is generally considered as one of the biggest motor races worldwide.  Neste, the global market leader for sustainable, premium-quality diesel made of residues and waste products could celebrate a double win with Neste Renewable Diesel in the fiercely contested FIA Alternative Energies Cup at its very first run-out at the Nürburgring. This result speaks in favour of the fuel's remarkable reliability and motor compatibility. After a total of 24 hours of racing time, the English team of Saxon Motorsport won the class on a BMW 135 D GTR with a scarce five minute advantage, ahead the "tuning akademie's" Audi A4 quattro, both running on Neste Renewable Diesel.

After having crossed the finishing line, Nick Barrow, Managing Director of Saxon Motorsport and team manager of the class winning team, was very enthusiastic about Neste Renewable Diesel: "It's an outstanding fuel with absolutely no signs of soot and with a perfect performance", exclaimed the team boss, who, during the marathon run, also took over the steering wheel himself.

The "tuning akademie"-team finished up second with an Audi A4 quattro, that had completed a large number of laps on the Nürburgring-Nordschleife in the past.  "What finally counts is a combination of fast lap times, practically no technical problems and just a limited number of refueling stops", explains team manager Thomas Hanisch. "And that's exactly where Neste Renewable Diesel becomes a determining factor on the road to success."

Nevertheless, the fuel's superiority may be expressed quite well in terms of the racing distance: In the class of alternative propulsion systems competitors fell behind more than 13 laps or failed completely.

There is one special feature to be mentioned: Neste's fuel developer Markku Honkanen himself was a member of the four-person driver team of the "tuning akademie". The enthusiastic motorsports fan and active racing and rally driver in private life insisted on testing "his" diesel's performance in person during the toughest race on earth. "Although on a strictly private basis", as he stressed.

Outside of racing, Neste Renewable Diesel is used not only as a blending component by fuel retailers but also in its pure form in city or corporate fleets as well as in special applications such as yachting, events and construction. And it is not only the reduction in greenhouse gas emissions, but the reliability, storability, the fact that it is odorless as well as its clean burning among others, that excites users.