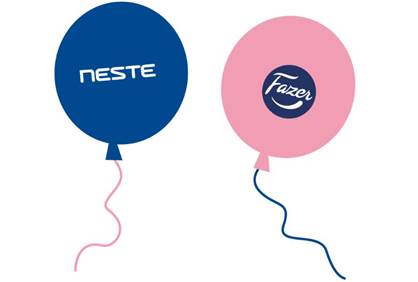 In the spirit of circular economics, Neste and Fazer Bakery are joining forces with their Doughnut Trick campaign. The oil that was used to fry Fazer Bakery's May Day doughnuts will be recycled by refining it to produce Neste MY renewable diesel. The value of the fuel will be donated to the Finnish chapter of the charity SOS Children's Village International. The amount of diesel that's made from the oil used to fry every three doughnuts is enough to drive a distance of about one kilometer.   Now, for May Day, Fazer Bakeries and Neste are doing good together. Fazer Bakeries will donate to Neste the fat used to fry their May Day doughnuts, and Neste will use the waste fat to produce Neste MY renewable diesel. The value of the fuel will be donated directly to the summer camp activities of the Finnish chapter of SOS Children's Village International.   Fazer Bakery and Neste came up with the Doughnut Trick campaign as a way of reminding people in Finland about the potential of the circular economy and recycling. There are many new uses for waste and residues. At the same time, the companies also want to remind home doughnut makers of the correct means of final disposal of waste frying oil. The right destination for domestic waste fat is compost or mixed waste - under no circumstances should it be poured down the drain. A small amount of fat can be absorbed directly into biowaste, but larger amounts should be put into mixed waste. In the latter case, it's a good idea to dispose of the cooking oil in the bottle it came in, for instance.   Environmental questions are generating more and more discussion and debate, and the circular economy has become a major global trend. Rotary economics is important to Neste and Fazer Bakery alike. The two companies aim at utilizing resources and exploring innovative ways to recycle and reuse materials ever more efficiently.

"We were immediately inspired by the cooperation idea, as Fazer Bakery's primary goal is to prevent the generation of waste and to reduce its volume," says Nina Elomaa, Director, Corporate Responsibility at Fazer Group. "In our opinion, this is a great way of introducing people concretely to the circular economy, and at the same time to support a good cause," Elomaa continues. "Through the Doughnut Trick, we want to illustrate how waste and residues can be reused to produce new products, in this case high-quality Neste MY renewable diesel," adds Johan Lunabba, Director, Sustainability at Neste.   May Day is a natural time for cooperation between the two companies, since doughnuts are very popular in Finland at this time of year. As many as 16 million Fazer Omar and Berliinimunkki doughnuts are eaten annually. This is around three doughnuts a year for each person in Finland.   Normally Fazer's frying fats are reused as a raw material by the asphalt and soap industries. For its part, Neste already recycles all the fat that is used in the meat industry and other industries in Finland to make renewable diesel. Motorists in Finland can buy Neste MY renewable diesel, which is made 100 percent from waste and residues, from several gas stations in the capital region. There is also one station in Turku selling it, and one in Tampere. Neste MY renewable diesel can help its users reduce greenhouse gas emissions by up to 90% over the lifecycle of the fuel compared to conventional fossil diesel.   Last Christmas, Neste jointly cooperated with the Chemical Industry Federation of Finland and other partners in its Christmas waste ham fat campaign. The campaign involved collecting ham roast fats for recycling into fuel, and was a big success. The proceeds from the fuel were donated to charity. The May Day Doughnut Trick continues these charitable efforts in the spirit of the circular economy, this time with doughnut oil fat.

Johan Lunabba, Director, Sustainability, Neste, +358 10 458 0795, johan.lunabba(at)neste.com; Nina Elomaa, Director, Corporate Responsibility, Fazer Group, +358 45 354 86 11, nina.elomaa(at)fazer.com   Neste and Fazer's are carrying out the Doughnut Trick as a joint venture. It continues the Christmas ham campaign, which was the brainchild of the Chemical Industry Federation of Finland. The purpose of both the ham and doughnut campaigns is to bring the circular economy closer to the everyday lives of consumers through concrete examples. For May Day 2017, Fazer will be donating to Neste the fat that was used to fry its doughnuts. Neste will use it to make Neste MY renewable diesel at its Porvoo refinery. The value of the fuel will be donated to the Finnish chapter of the SOS Children's Village International charity. Neste in brief Neste (NESTE, Nasdaq Helsinki) builds sustainable options for the needs of transport, businesses and consumers. Our global range of products and services allows customers to lower their carbon footprint by combining high-quality and low-emission renewable products and oil products to tailor-made service solutions. We are the world's largest producer of renewable diesel refined from waste and residues, and we are also bringing renewable solutions to the aviation and plastics industries. We want to be a reliable partner whose expertise, research and sustainable practices are widely appreciated. In 2016, Neste's net sales stood at EUR 11.7 billion, and we were on the Global 100 list of the 100 most sustainable companies in the world. Read more: www.neste.com/en