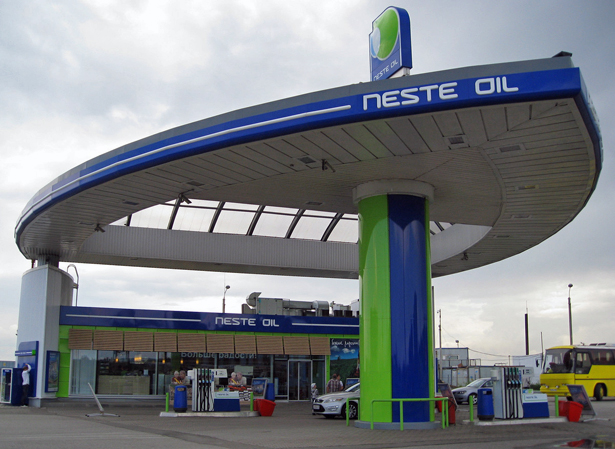 In the summertime, many Finns take a road trip to the east to Russia or over the Gulf of Finland to the Baltic states. And why not: after all, both sites offer plenty of wonderful tourist attractions ranging from manors to sandy beaches and from lively cultural cities to idyllic rural landscapes.

Neste Oil will accompany you in Northwest Russia and the Baltic states. Neste Oil has a total of 68 refueling locations in Russia. 48 of these are service stations that also offer other services in addition to fuel.

The Baltic stations are located in large cities and along the Via Baltica. Neste Oil's non-fuel partner Reitan does business at many of these stations, offering travelers snacks, soft drinks, magazines, and other similar items. Hesburger is the market leader in fast food in the Baltic states and is also a partner on Neste Oil stations, reinforcing the services offered to our customers.

The fuels sold at the Neste Oil stations in Russia and the Baltic states are of the same high quality as the fuels sold in Finland. Neste Oil's Futura fuels were launched in Russia and the Baltic states earlier this year. They differ from the competing brands mainly because of their high quality. Shopping at the stations and the partner stores is facilitated by the fact that you can use the same Neste Oil card as in Finland. For specific locations of the stations, please see the map on the Neste Oil website of each country.

The main roads in both the Baltic states and the St. Petersburg region are in good condition, but you should be prepared for surprises when venturing out onto the smaller roads. For example, some of the roads close to Lake Ladoga, a favorite destination for Finns, are very bumpy.

Moving around between the Baltic states is very easy, thanks to the EU. There is no fuss when crossing a border: you just drive past the old frontier station. Security has improved and people traveling from Finland to the Baltic states need not take any special precautions.

The situation is slightly different when traveling to Russia, however.

"Even though the situation is continuously improving, the traffic culture in Russia is still pretty wild, which means that people drive at high speeds and disregard traffic rules in some parts of the country. Vigilance and caution are in order both when driving the country roads and when driving in a city,” Kopra points out.

Russia is not as safe a country as the Baltic states, which means that you should select your parking spot with care. Guarded parking areas subject to a charge, the parking lots of malls, and the parking lots of hotels are safe, however. You should also have an international insurance certificate ('a green card') and your vehicle registration book when crossing the Russian border. Furthermore, you should check your vehicle insurance policy for limitations on Russia.

Notification under Chapter 9, Section 10 of the Finnish Securities Market Act: direct and indirect holdings of BlackRock in Neste Corporation exceeded 5%