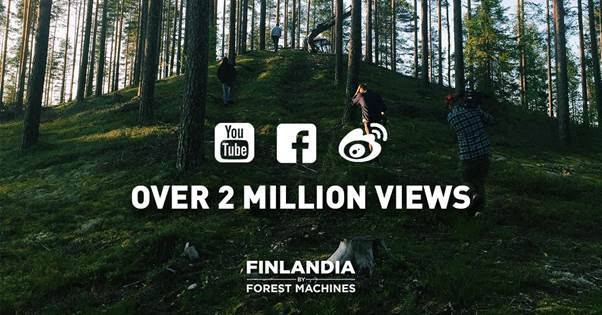 To celebrate Finland's 100 years of independence and Finnish work, on the eve of Independence Day in December 2017, Neste and Ponsse jointly presented their new rendition of Finlandia, the symphonic poem composed by the pride of Finland, Jean Sibelius. The new arrangement of the piece comes straight from the deep woods of Savonia in Finland. The video is part of Neste's campaign to support Finnish work in a concrete way. By the end of 2017, the video was watched over two million times. As a result, Neste doubled its initial donation to Finnish work, bringing the total sum to EUR 40,000. "We want to thank everyone who wanted to show their support for Finnish work by watching the video. Taking pride in one's work is clearly an important theme for many of us. With this donation of 40,000 euros we want to give concrete support to unemployed people in Finland, and to help them in getting to job interviews and temporary work," says Mika Hyötyläinen, Vice President of Marketing for Marketing & Services business area at Neste. "It's estimated that up to eighty percent* of people who use employment services in Finland are highly motivated to find work. The aim of our campaign was to make it easier for people to accept work they're offered, and to ensure that commuting to and from work is not an obstacle to taking a job. This is even more important now as the legislation in Finland requires that job seekers have to accept work as far as 80 kilometers from their home," Hyötyläinen continues. The Finlandia by Forest Machines campaign officially ended at the end of 2017, and was watched over two million times on different channels such as YouTube, various other media channels, and social media also internationally. The Finnish National Organization of the Unemployed, Työttömien keskusjärjestö ry, is an official partner in the campaign, and the donation will be made together with the organization in February 2018. Neste Corporation   Kaisa Lipponen Director, Corporate Communications   More information: Mika Hyötyläinen, VP Marketing, Marketing & Services, Neste, tel. +358 (0)10 458 4132, mika.hyotylainen(at)neste.com

Read more:Hashtag for the campaign: #tributetofinnishworkFinlandia by Forest Machines - a Tribute to Finnish WorkPress Release: The campaign video by Neste and Ponsse reached 100,000 views in just 32 hours - stakes and the donation for Finnish work raisedPress Release: Can you play Jean Sibelius's Finlandia with forest machines? Neste and Ponsse join forces in a campaign for Finnish workPonsseTyöttömien keskusjärjestö ry

* For the figure cited: The Association of Finnish Local and Regional Authorities (in Finnish)

Neste and Ponsse released a new version of the symphonic poem composed by Jean Sibelius, Finlandia, performed by forest machines. The arrangement of the piece, called Finlandia by Forest Machines - a Tribute to Finnish Work, comes straight from the deep woods of Savonia in Finland. Partners in the video production include the social media agency Kurio, the No-Office production company, and the communications agency Miltton. More than 300 video clips and nearly 1,000 audio clips were used, originating from three forest machines lubricated by Neste and fueled by Neste MY Renewable Diesel. The video was starred by professionals of the forest machinery Marko Karhu (forester), Anne Räihä (driver), Hannu Liikanen (driver), Tarmo Juntunen (driver) and Janne Oldenburg (sound recordings).