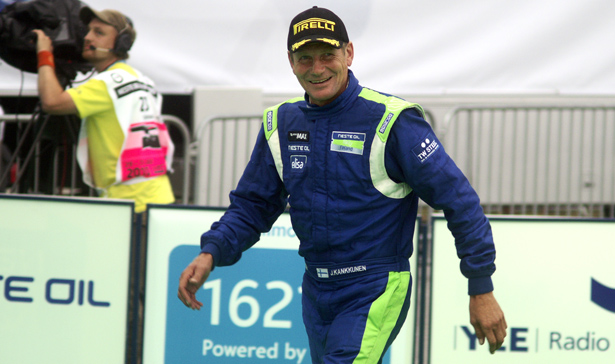 The Neste Oil Rally Helsinki Battle, one of the biggest free events to be held in Helsinki this summer, presents to the public one of the most talked-about rally car models of the last millennium. Juha Kankkunen, a four-time World Champion, will once again sit behind the wheel of the legendary Group B rally car and let the engine roar at the Hietalahti street track. It will be a true blast from the past.

To celebrate its 20 years of sponsorship of the Finnish World Rally Championship event, Neste Oil has arranged the Neste Oil Rally Helsinki Battle for 26 July. The event is free to the public, and it features all of today's rally stars and old legends on the same track for the first time ever.

Before the actual race, Juha Kankkunen hits the track with his gorgeous Audi S1 from 1985. This millennium has seen that Group B car in public only twice. Familiar from the World Championship rallies of past decades, these vintage vehicles are now rare items even on the international scale, and their selling price is around one million euros each.

Group B cars have not raced in the World Championship series since 1986. Equipped with a fibre-glass body, a tubular chassis and a 200-litre fuel tank, these cars boast nothing less than 600 horsepower. The typical figure for modern WRC cars is half of this, but their safety and driveability are significantly greater.

'The cars differ like night and day. I would no longer dare to drive between trees in a Group B car. They go fast on a straight road, but otherwise they are difficult to handle,' says Kankkunen of his vintage vehicle.

Sirpa Tuomi, marketing manager at Neste Oil and the person behind the idea for the event, is delighted that, alongside Kankkunen, other Finnish rally legends and WRC teams are excited to participate in this unique event.

'I appreciate the fact that Juha contributes to the event by both racing and bringing a true piece of rally history to the heart of Helsinki. It is wonderful how the event brings together the past and present of rallying, in terms of both drivers and cars,' Tuomi says.

Neste Oil has been sponsoring Neste Oil Rally Finland, a Finnish World Rally Championship event, for 20 years now. In this time, many things have changed and developed, from fuels to the motoring in general. The safety of motoring has improved remarkably, and many modern engine technologies require considerably less fuel than older ones. Two decades ago, Neste Oil was one of the first oil refining companies to bring sulphur-free fuels to the market. Now we are the world's largest producer of renewable diesel. We are also the developers of the top-quality Neste Pro Diesel, which is the only diesel fuel in the world to meet the requirements of the WWFC fuel category recommended by car manufacturers. We have worked uncompromisingly over the years to promote cleaner mobility. The only way is forward.