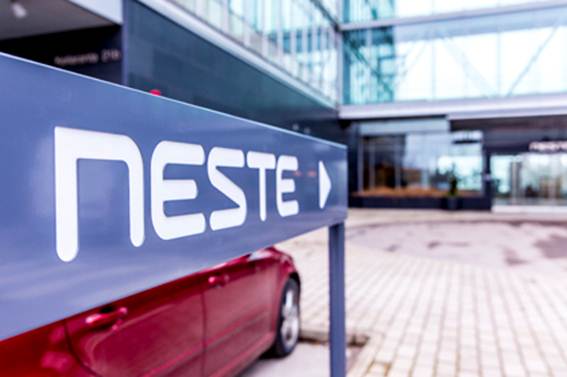 As of June 1, Neste Oil's official name is Neste Oyj in Finnish, Neste Abp in Swedish and Neste Corporation in English. The Annual General Meeting decided to drop the word Oil from the name on April 1, 2015. The name change reflects the company's transformation from a traditional oil refiner to a global pioneer in renewable fuels.

"We are going forward and are much more than a conventional oil refining company these days. Where others drill underground, we seek growth from feedstocks considered to be waste and residues. Renewable Products, mainly renewable fuels, accounted for 40% of our comparable operating profit in 2014, and our growth objectives are also associated with other products based on a renewable feedstock portfolio, such as biochemicals and bioplastic," says Matti Lievonen, Neste's CEO.

The name change will not concern the company's service stations at this time. In other words, vehicles will be refueled at stations named Neste Oil for the time being. The decision on the schedule of changing the name of the station chain will be made separately at a later time so that it can be scheduled and implemented reasonably and cost-efficiently.

New neste.com serves also as mobile The Group's website is located at www.neste.com. The site has been completely renewed to be easier to use. Neste.com will serve customers with all devices and in an increasing number of markets. Services for Finnish private and corporate customers will still be found at neste.fi. Visual look remains unchanged, changes in contact information Neste's visual look will remain unchanged, and the word Oil will be omitted from the company's logo. The name change will also be implemented in the company's subsidiaries in phases. The change will result in changes to the following information, for example:

Neste in brief Neste is a forerunner in oil refining and renewable solutions. We offer our customers cleaner traffic solutions and industrial products based on cutting-edge research. Our sustainable practices have received recognition in the Dow Jones Sustainability World Index and the Global 100 list of the world's most sustainable companies. In 2014, our revenue amounted to EUR 15 billion. Neste shares are listed on NASDAQ Helsinki. Cleaner traffic, energy and life are moved forward by 5,000 professionals. Learn more at neste.com