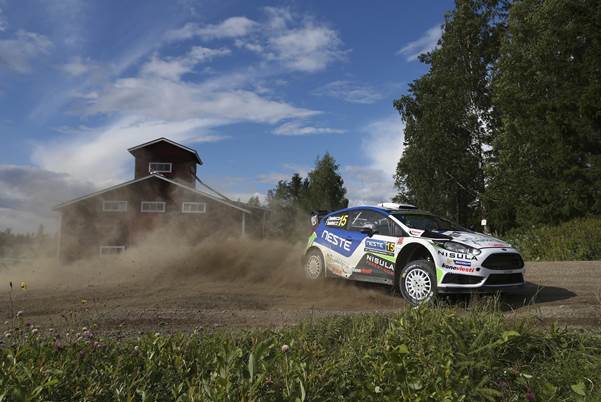 Once again, Neste Rally Finland will bring the best drivers to compete with each other on the fast gravel roads of Central Finland this year. The traditional event in a magnificent lakeside setting is one of the biggest annual public events in the Nordic countries.

The Paviljonki Rally HQ and Service Park lot in the center of Jyväskylä will cater for visitors throughout the event. Some 60,000 visitors are expected in Paviljonki to watch the rally teams work during service breaks and to excitedly see whether Finnish drivers will succeed in winning on their home turf for the third time in a row.

"In addition to exciting motorsports, the rally provides a good foundation for the development of cars. It will ultimately also benefit consumers in the form of safer, more economical and more powerful passenger cars," says Sirpa Tuomi, Marketing Director at Neste. "For Neste, sustainability and environmental concerns are among the basic conditions for operations. It is important to Neste that Neste Rally and its audience also continuously improve on their sustainability, safety and environmental aspects. In fact, the public events of Neste Rally have become increasingly environmentally friendly," Tuomi adds.

Neste Renewable Diesel used to generate electricity for the event

Electricity for the Neste Futura viewing area at the Saalahti special stage and Valtra's "Drivers Meet the Kids" family event is generated with Neste Renewable Diesel. The use of renewable fuels in generating electricity makes it possible to significantly decrease the carbon footprint of this major event. It means that air quality in the area is more comfortable, as renewable diesel causes considerably less odor and particle emissions into the environment than fossil fuels do.

Neste Rally will take place between on 29-31 July 2016 in the Jyväskylä region. The competition will begin on Thursday evening in the host city Jyväskylä, with the Harju urban special stage. The winners will be announced on Sunday morning after four special stages and the awards will be handed out at 3 pm. at Paviljonki.