“We are not just hosting the Super Bowl. We are redefining it.”
-- Super Bowl 50 Host Committee CEO Keith Bruce

SAN FRANCISCO -- When San Francisco Bay Area political, sports and business leaders made their bid to host Super Bowl 50, they vowed to give the biggest annual event in sports a California twist.

Like all Super Bowls, this one would have sports stars, rock stars, fan fairs, fun runs, concerts, parties and the most-watched TV show in the USA. But in the Golden State, a global leader in combating climate change, the golden anniversary would mean more than glitter and game balls.

“We’re going to ensure that this Super Bowl has a lasting positive impact” --  socially, economically and environmentally, said Daniel Lurie, the nonprofit-group CEO who made the Bay Area’s Big Game pitch to NFL team owners.

And so, when it came time to plan for the energy needs of 1 million guests at the Super Bowl City fan village, the event organizers knew they wanted the most sustainable solution available.

Located on San Francisco’s famed Market Street and waterfront Embarcadero, Super Bowl City would be the lively fan village and news broadcast base during the nine-day runup to the Feb. 7 NFL championship game.

It would feature family-friendly activities including concerts, celebrity appearances, interactive gaming, social media and data visualizations. Fans would play as digital avatars on giant screens while their movements were replicated by motion sensors that lit up the Fan Dome. A 50-foot-wide, 15-foot-tall Fan Wall would display leader boards and stats from the Fan Energy Zone games, user-generated content, social media visualizations and live video feeds from around Super Bowl City.

What’s more, Super Bowl City would be the base for the CBS Television Network and the NFL Network, which would be broadcasting on television, radio and digital media throughout Super Bowl Week.

Lights, cameras, amplifiers, communications, computers, digital billboards — all that was going to require a large, dependable, onsite power supply. Plus, with more than 100,000 visitors to the fan village daily, the power supply could not pollute the air. And at this Super Bowl, with its green creed, that supply had to be environmentally sound as well.

Keith Bruce, a veteran of global sports marketing and event management, is CEO of the Super Bowl 50 Host Committee and the man accountable for keeping the big promises made by the Lurie group while finalizing thousands of small logistical arrangements.

For Super Bowl City, he had secured the cleanest portable generators available: diesel-powered machines meeting U.S. EPA Tier 4 standards for reduced exhaust emissions and quiet operation. Then, in midsummer 2015, he saw that big truck and bus fleets around the Bay Area were switching from conventional, petroleum-based diesel fuel to a different product.

The new fuel was renewable diesel by fuels producer Neste. Made from waste and residues, Neste’s renewable fuel was cleaner, favorably priced, and easily incorporated into existing fueling systems. Neste’s intent was straightforward and resonated well with what Keith Bruce was aiming to achieve: “To create responsible choices every day.“

The new users in the San Francisco Bay Area were enthusiastic about the Neste fuel’s potential to help them meet climate and public-health goals. The city of Walnut Creek was first to switch its municipal fleet.

In San Francisco, after a successful six-month trial in Fire Department vehicles, officials said all city vehicles would switch to renewable diesel. “Our fleet ran cleaner and more efficiently, and we are completely supportive of the Mayor’s call to switch to renewable diesel to improve the environment and create a healthier future for our residents,” said the fire chief. In the city of Oakland, “The use of renewable diesel does not require changes in logistics, and it is compatible with all diesel engines. It is possible to migrate to a cleaner fuel virtually overnight,” said the fleet manager. At delivery giant UPS, “It’s actually as good or even better from a performance perspective as traditional diesel,” said the vice president for energy procurement to the New York Times.

And in December, California ordered state agencies to buy renewable diesel when buying bulk fuel for vehicles and equipment. The change would help the state meet its goals for combating climate change significantly: The office issuing the order estimated that 49,000 tons of carbon intensity would be saved annually by replacing 7.3 million gallons of conventional diesel with renewable diesel.

Keith Bruce wondered if renewable diesel could help his program meet its own green goals. “We had a huge power need at Super Bowl City. We needed green energy supplied by partners who were world-class brands and leaders in their industry,” he said. Shortly after connecting with the firm’s Bay Area partners, he was convinced.

“We had found that partner: Neste.”

Looking to the future

One of the final Super Bowl 50 activities will happen late in the evening of Feb. 7, and it also has a Neste fuel connection. The Big Game will be over; the Lombardi Trophy will be heading to a new home with the 2016 NFL World Champions. Five thousand people who were at the game will be traveling home, too, to cities in the north and eastern regions of the Bay Area, aboard 100 Fan Express buses powered by Neste’s renewable diesel.

“Making sustainability part of our DNA is something that no sporting event in the United States has ever done, but we hope it’s not the last,” concluded Super Bowl Host Committe CEO Keith Bruce.

“We hope future sporting events will see the success we’ve had here in the Bay Area with Super Bowl 50, and they too will use renewable diesel to advance their cause.”

Neste is the world's largest producer of renewable diesel. Made at four plants around the world from non-petroleum sources such as waste and residues and vegetable oils, Neste’s renewable diesel reduces carbon emissions by 40 percent to 80 percent compared to conventional diesel fuel. It also reduces particulate emissions and nitrous oxides.

Switching from conventional fossil diesel to clean renewable diesel requires no additional investments on infrastructure or engine modifications. Thus, fleets can switch to renewable diesel overnight. It is a 100 percent replacement; no blending is needed.

Neste provides renewable diesel to U.S. refiners, blenders and fuel distributors. It is also available to consumers at fuel stations in Northern and Southern California.

Neste is a pioneer in oil refining and renewable solutions. We provide our customers with premium-quality products for cleaner traffic and industrial products based on world-class research. We are the world's leading producer of renewable diesel, and our annual production capacity is more than 2 million tons. We also are the world's largest company providing renewable fuel from waste and residues. Our sustainable operations have received recognition in the Dow Jones Sustainability World Index and the Global 100 list of the world's most sustainable companies, among others. Our net sales for 2014 amounted to approximately EUR 15 billion, and our shares are listed on NASDAQ Helsinki. Cleaner traffic, energy and life are moved forward by about 5,000 professionals. More information: neste.com 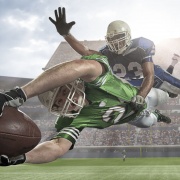 “We hope future sporting events will see the success we’ve had here in the Bay Area with Super Bowl 50, and they too will use renewable diesel to advance their cause.” Keith Bruce
Keith Bruce, Super Bowl 50 Host Committee CEO

California ordered state agencies to buy renewable diesel when buying bulk fuel for vehicles and equipment. The change would help the state meet its goals for combating climate change significantly.