Testing the fuels of the future 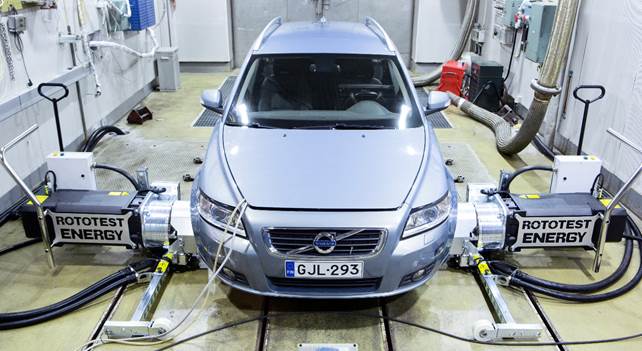 A million kilometers of test drives, a merciless cold weather simulator and numerous engine tests for special purposes. These three testing methods are among those used by the Neste Engine Laboratory in Kilpilahti to help guarantee consistent, high-quality, low-emission fuels that comply with regulations for Neste's customers.

The Engine Laboratory has nearly 60 years of experience under its belt, ensuring that Neste's fuel products keep their customer promise. The fuels must be safe, economical and environmentally friendly to use in any conditions.

The laboratory's team of seven top experts use ten vehicles and several test engines to test new fuel mixtures developed by the company's own product development laboratory, and to verify the compatibility of Neste's fuels with additives made by other manufacturers. With the dozens of various field tests and equipment simulating real-life conditions, the team clocks up around one million kilometers of test drives each year.

Hundreds of thousands of these kilometers are driven in actual road conditions. Another testing method is a testing facility built inside the Engine Laboratory, where short tests can be used to simulate a wide range of different road conditions. The third type of test is conducted with engines alone or on test benches built from engine parts, such as the injection systems in diesel engines.

Currently, the laboratory is working on an 18-month project in which four identical cars are driven for 100,000 kilometers each. A range of tests measuring fuel consumption and factors such as engine wear are carried out at the beginning and the end of the testing period as well as several times during the project.

"We are carrying out the tests increasingly in field conditions, where the cars are measured for an enormous amount of data on a continuous basis. The data is then transferred via 4G network to the laboratory for analysis. This way we can react if the readings show anything unusual," Sarjovaara explains.

The test laboratory has a room with a test environment known as the chassis dynamometer, which has seen hundreds of tests. Cars are driven in this environment at a speed of up to 160km/h so that the traction wheels are turning but the car remains stationary.

In the middle of the 150-square-meter room stands a familiar 2010 Opel Astra that looks like it is in intensive care: tubes and wires connect the engine cavity and the exhaust piping to dozens of measuring instruments. On the front axle, the front wheels are replaced by an electric dynamometer, or an electric brake, which simulates the load of the road, such as hills and friction.

Measuring instruments can be found both inside the car and on the control desk outside the room. In front of the car there is a metal tube resembling a gigantic ventilation duct, which looks like it could swallow the car any minute.

Oncoming air current is simulated as part of the test by blowing air against the car with the same speed as the speed indicator of the car shows. This creates realistic conditions similar to, for example, driving in cold winter conditions.

One can only imagine, what the force of the air current coming out of the tube must feel like when the speedometer shows over 100 km/h and the temperature in the test room plummets down to -36 degrees Celsius.

The laboratory has diesel and gasoline engines dating from different periods, each with their own purpose. Sarjovaara shows us the engine of a VW Transporter from the 1990s. It is still used in tests to ensure that fuel additives do not cause problems with engine valves in sub-zero temperatures.

The most modern of the engines is the diesel engine manufactured by the PSA Group, the manufacturer of Citroen and Peugeot cars. The engine is customized to comply with the international standards for test engines. Standardization is necessary so that the results produced by testing laboratories around the world are mutually comparable and that tests can be repeated in different laboratories.

Testing methods are continuously being developed, as each year brings some new technological innovation. While the basic logic of the combustion engine has not changed since the late 19th century, small innovations are constantly being developed to improve energy-efficiency and safety while reducing emissions.

At the moment, engine testing is affected, most of all, by the use of a computer that connects different parts of the car with each other. Engine performance is also strongly dependent on transmission and brakes, so it is increasingly difficult to test an engine on its own, and tests are more commonly carried out with real cars on chassis dynamometers or in genuine road conditions.

"Alongside field tests, the tests conducted in laboratory conditions on the chassis dynamometers are the most important ones because of their better accuracy and repeatability," says Sarjovaara.

The Neste Engine Laboratory works in close co-operation with many engine and car manufacturers. It also participates in joint projects and information exchanges with both Finnish and international scientific research institutes and commercial engine laboratories. Through wide-reaching collaboration and the tireless cultivation of its own expertise, Neste guarantees the continuity of its own research operations. Thanks to that research, Neste fuels are, and will be, of high quality, efficient, safe and environmentally friendly.

Neste (NESTE, Nasdaq Helsinki) builds sustainable options for the needs of transport, businesses and consumers. Our global range of products and services allows customers to lower their carbon footprint by combining high-quality and low-emission renewable products and oil products to tailor-made service solutions. We are the world's largest producer of renewable diesel refined from waste and residues, and we are also bringing renewable solutions to the aviation and plastics industries. We want to be a reliable partner whose expertise, research and sustainable practices are widely appreciated. In 2016, Neste's net sales stood at EUR 11.7 billion, and we were on the Global 100 list of the 100 most sustainable companies in the world. Read more: www.neste.com/en