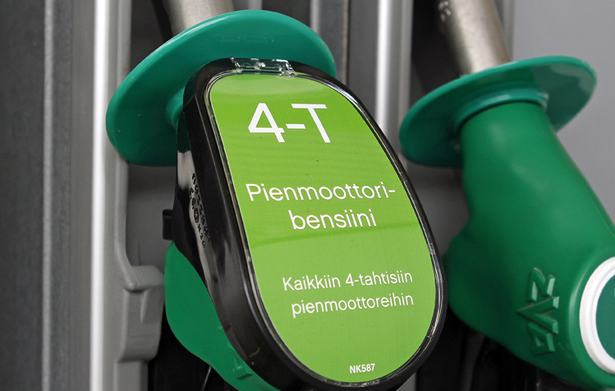 Juha Moilanen, one of Neste Oil’s technical experts, explains some of the main benefits of using small-engine gasoline or alkylate gasoline, as it is also known more technically speaking.

“Small-engine gasoline is completely different from regular gasoline in terms of what it’s made from. It’s custom-produced from just a few hydrocarbons, primarily alkylate. It contains no olefins, ethanol, benzene, or other harmful aromatic compounds.”

“Thanks to its composition, small-engine gasoline doesn’t have the same odor issues that regular motor gasoline has. Filling up a small machine brings the user into close contact with the vapor given off by the fuel. Everyone notices the difference between small-engine gasoline and regular gasoline in this area. There’s also a big difference in the smell of the exhaust produced by the two fuels.”

Safer to use too

“The exhaust released by an engine running on small-engine gasoline has been shown to contain fewer harmful components than that released by regular gasoline. We carried out a study with the Finnish Institute of Occupational Health last winter comparing exhaust released by the two fuels. The results were very clear and showed that there’s a real difference.”

Smaller impact on the environment

“Small-capacity engines typically release a lot of emissions proportionally, and they’re not fitted with catalytic converters either. All of this means that fuel quality has a real impact. Small two-stroke engines, in particular, release unburnt fuel, which makes its way into the water in the case of outboards. A lot of studies have been done on this in Sweden and only small-engine gasoline is recommended on all the lakes and inland waterways there.”

“Small-engine gasoline combusts very cleanly. It doesn’t produce carbon build-up in engines and keeps combustion temperatures down as well. This is a plus in terms of maintenance and results in longer intervals between services and longer engine life.”

“Small-engine gasoline contains just a few hydrocarbons and nothing that will oxidize, result in build-ups of resins or sediments, or cause any other problems like this. When using regular gasoline, the light components evaporate off and leave the heavy ones behind. These can clog up the innards of fuel systems and make starting an engine more difficult. The different needs of two-stroke and four-stroke engines are taken into account as well, as we offer a pure 4T and a 2% pre-mixed 2T fuel.”

“Small-engine gasoline can be stored for long periods of time without any deterioration in quality, either in canisters or fuel tanks. This makes it an ideal choice for seasonal use, for mopeds and outboards for example. Before putting something away for a long time, it’s a good idea to run an engine long enough for the fuel to reach all its components. Our experience has been that no storability-enhancing additives are needed when using small-engine gasoline.”

Where can you buy Neste small-engine gasoline in Finland?

“2T and 4T small-engine gasoline are sold in five-liter canisters across Finland. 4T is also available from forecourt pumps at stations in Espoo, Helsinki, Tampere, Turku, Jyväskylä, and Porvoo.”